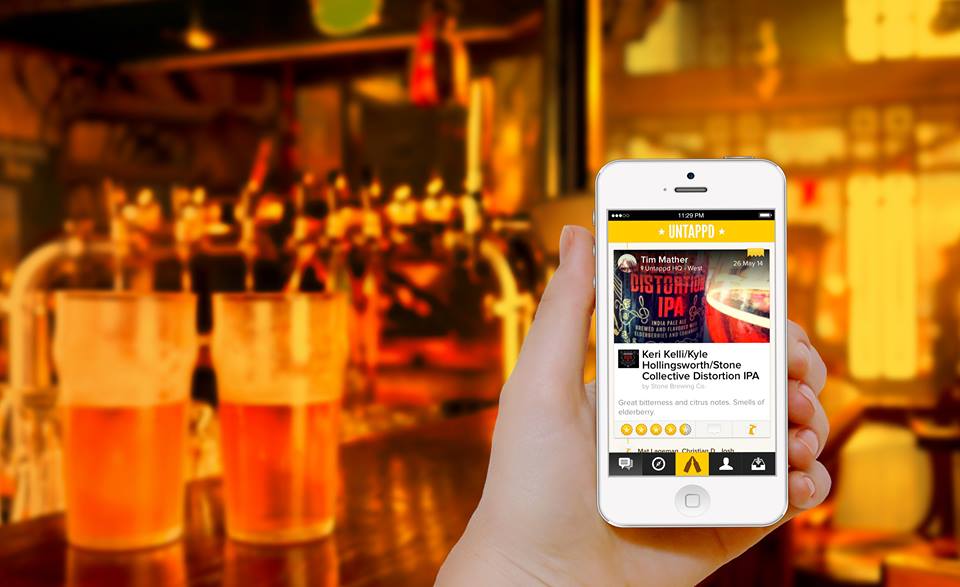 When UnTappd hit the market in 2010 its founders were okay with being tagged Foursquare for beer drinkers, as everyone from Mashable to Inquisitrlabeled it. That’s because back then, UnTappd was basically that, a check-in service.

“Now, we see our app as a beer discovery app, rather than just a check-in service,” says Greg Avola, UnTappd’s co-founder and chief technology officer. “We’re focused on real-time and we focus more on the recommendation side. We want to help users plan their evening, to discover what beers to try.”

UnTappd has grown its offerings since its launch five years ago. The recommendation features has helped build a fiercely loyal user base of craft beer enthusiasts that topped 1.6 million by the end of 2014.

Avola is the East Coast half of UnTappd and is based in New York. UnTappd co-founder Tim Mather — the company’s CEO and lead designer — is in California. Though, it isn’t the fact that Avola and Mather have built a platform that is now home to 2+ million users and has catalogued more than 500,000 beers (commercial and homebrewed from across the globe) while being geographically separated — and without any advertising or venture capital dollars — that’s impressive. Avola and Mather have built UnTappd into craft beer’s social media platform of choice in their spare time.

Mather is a senior UX designer at Disney Interactive and he spends his days handing UX, UI and prototyping support for a variety of Disney’s online destinations. Avola is a senior software engineer for ABC News and is responsible for building and supporting various parts of ABCNews’ digital properties.

And after hours the pair manages a cross-country workflow that has allowed them to create the digital platform of choice in what is, according to theBrewers Association, a $19.6 billion craft beer industry.

“I think the key to being able to manage this is to manage your time efficiently and take breaks. Otherwise, you’ll be so wrapped into your full-time job and this and that, it becomes hard to see the line between them,” says Avola, who notes that he and Mather spend about 20–24 hours a week on UnTappd.

Avola notes that the lack of outside funding does slow down the design and development process, he notes that he and Mather do have the freedom to “have total control over the end result.”

ORGANIZATION: Avola and Mather rely heavily on Slack, Basecamp and “a healthy amount of iMessage” as their key communication and project management tools. “When a new task gets identified and scoped out, we add them to our lists, manage and report on our progress in those task lists. It’s been extremely helpful and easy to manage,” says Avola.

DISCIPLINE & FOCUS: With limited resources and time, Avola and Mather spend time before their full-time gigs catching up on anything urgent from the overnight. “Because we are remote and in different time zones, most of the work that Tim does is when I’m asleep, so it’s incredibly important to keep detailed status log so we can hand off work correctly,” says Avola. “We try to do as much siloed work as we can for task because we don’t have the luxury of working together on a task.”

FOCUS ON THE USER & COMMUNITY: “We didn’t expect that we would be dealing over 2 million users on the app when we first started,” says Avola. “It’s a humbling experience to have that many people using our service, and we use that as motivation to keep going.” UnTappd has a group of about 50 super users who help beta test new features and moderate content on the app. “Getting feedback is what we have been about since day one … Making all your users happy is impossible, but by listening, we can try to focus in on trends which help determine future enhancements,” Avola says.

COMMUNICATION: Even with UnTappd being a two-man team, communication is key. “When you are in an office with people you’ll see them every day and talk with them face to face with issues,” says Avola. “With Untappd we don’t have that luxury. We need to focus on being concise with our emails and messages, to make sure everyone is on the same page, so nothing gets missed.”

THE NIKE PRINCIPLE: “We built a prototype within 24 hours of having the idea back in the summer of 2010. I think that a lot of startups feel they need to search for funding for an idea, but at the same time, you can build an MVP and go from there to see if it sticks,” he says. Avola says the key to UnTappd’s growth was simply “just doing it.”

While UnTappd is a beer-focused platform, the key is the community beer and brewing creates.

“We’re the ones that can help foster the experience at the bar, connecting the brewery with the customer and the customer with the beer. And all of that benefits the venue,” Avola says. “The cool thing about beer is that it creates conversation across geographic boundaries and we can enhance that experience.”